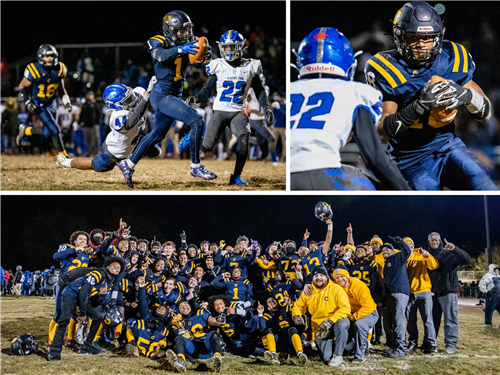 Panthers senior QB Adonis Hunter ran for three TDs and threw for another two, including the 25-yard game winner to senior WR TJ Harris, as the Cheltenham claimed its first District I 5A Championships with a come-from-behind 43-42 instant classic over the Academy Park Knights on Friday night.

The fourth quarter was a track meet with the teams combining for 36 points, including a frenetic 22-point outburst in the final minutes. A 21-point Panther rally put them on top for the first time, 35-28, with five minutes to play. Academy Park answered the Panthers with a TD drive and two-point conversion to regain the lead at 36-35 with under two minutes to play.

Hunter marched the team down the field, converting numerous gutsy fourth downs and benefiting from an APHS penalty on a play that otherwise would have ended the season. Breathing new life and with 30 seconds remaining, Hunter hit a streaking Harris in stride on a post route and Harris did the rest, dragging an APHS defender with him into the end zone. Harris caught the ensuing two-point conversion to put the Panthers ahead 43-36.

Panther penalties gave the Knights a short field, and Academy Park wasted no time in taking advantage with an 18-yard TD pass to cut the Panthers lead to 43-42. The Knights opted for the two-point conversion but came up short when defensive end Darren Bennett broke through the line and into the backfield to blow up the play. Captain Zach Gaffin and Nasir Carson combined on the tackle to seal the Panther victory.