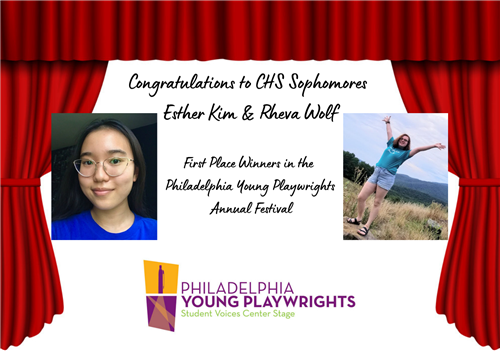 Working with teacher Molly Lazer, Kim penned "Hunger,” an allegorical play which tells of a kingdom which never runs out of food. Despite abundant food, the citizens continue longing for more, which slowly leads into catastrophe. As the ruling queen and her advisors try to appease the people, a little boy discovers a note that tells of a kingdom “where hunger is no more.”

“When I wrote 'Hunger,' I wrote it keeping in mind a message that I wanted an audience to hear, even though I didn't expect anyone to actually hear it,” she said. “So when I learned that my play was going to be produced, you can tell I was pleasantly surprised.”

Also working with Lazer, Wolf wrote “Would You Do It for A Juice Box?” a comedy following a high school science teacher and elementary school teacher who pair up to form Highland Elementary's first mad scientist duo! Wacky and wild experiments under the guise of an after-school science club ensue, and, of course, the results of experiments go wildly awry.

“It is such a cool experience to see something you wrote come off the page and come to life,” Wolf said.

Cheltenham School District students claimed six first place winners - three in the elementary school play category, one in the middle school monologue category and two in the high school playwriting category.  The six winning works will be performed on YouTube as part of the PYP’s virtual triple-bill SaturPLAY on Saturday, Dec. 11.

Each of CSD’s seven schools claimed a placewinner. This year's honorees were chosen from among 420 submissions from students in 35 schools.